We were all shocked to learn that last Saturday another tragedy occurred. Aiken has been mourning the loss of Aiken's Police Master Corporal Sandy Rogers who was senselessly killed Saturday morning in a shooting. She was honored with a candlelight memorial vigil on Tuesday of this week. I attended the Funeral on Wednesday and was truly amazed and proud of the enormous show of support for Sandy. I hope that everyone will continue to remember Sandy, her family and friends with prayers, and support. 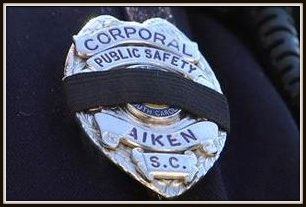 This is the second murder of a Aiken Public Safety Officer in less than six weeks. Aiken's Master Public Safety Officer, Scott Richardson, was the other officer killed in the line of duty. And if you remember a little over three months ago in Augusta, GA, Richmond County Sheriff's Deputy James D. Paugh was shot and killed in the line of duty too.
Law Enforcement personnel are a very tight family. When one goes down, all the others suffer too. When it comes to Law Enforcement members and their support for each other, there are NO City, County or State lines that separate them. Please keep all of the Law Enforcement families in our area in your prayers while they try to make sense of the tragedies. I have included in this update several items that we have been working on. There is a new leader at DHEC, some information about new custom license plates, a new alert program for SLED and much more in this week's legislative update.
I hope that you find this update helpful and informative:

You can view Live Broadcasts of the South Carolina House of Representatives daily legislative sessions by clicking Here.

Go to the new House Roll Call Votes Page to see how all the representatives have voted on all the important bills.

Thank you for the privilege of serving you in Columbia.  If I can ever be of assistance to you, or if you have ideas on issues you want me to share with the rest of the General Assembly, please don't hesitate to contact me at Home at 803-278-0892 or at work 803-279-8855.
Sincerely,
Bill Hixon