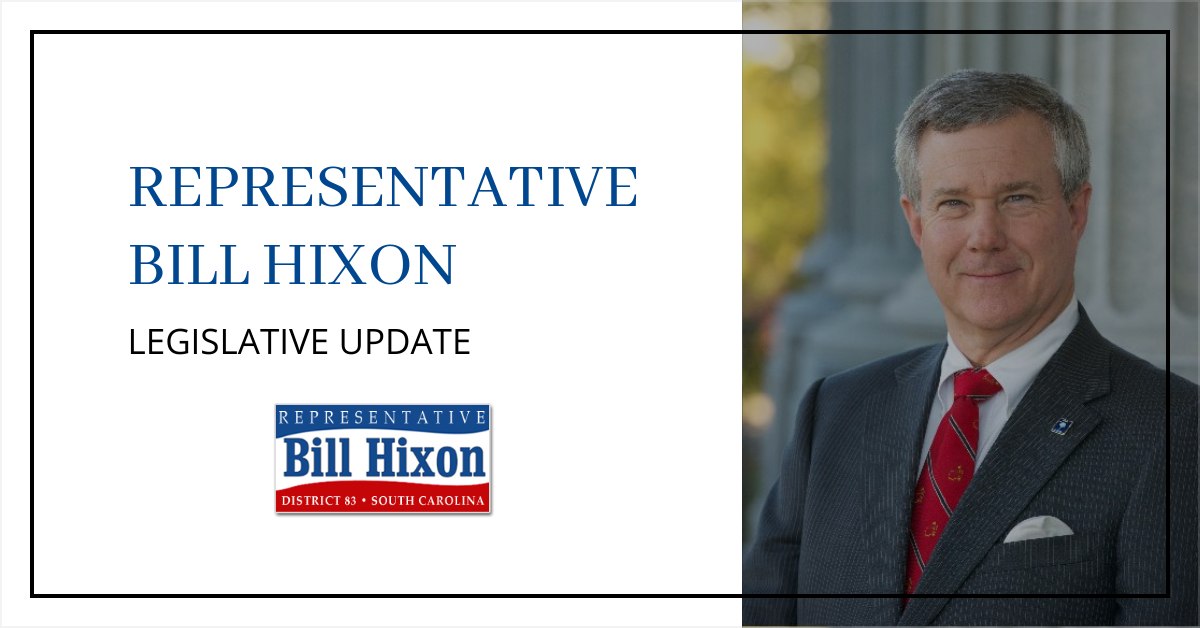 For the past few weeks, my colleagues and I have dedicated an enormous amount of time and energy to lay the foundation for this year’s state budget. We have focused on finding the best ways to use our state’s surplus funds, the federal ARPA funding, and dollars we’ve received for infrastructure projects. Throughout this process, my goal has remained the same–to provide the best benefit for taxpayers while prioritizing resourcefulness and funding the core functions of state government. With significant surplus funds (thanks to years of conservative budgeting and spending), the core of this year’s budget and fiscal policy as a whole relies on 4 basic pillars: Relief, Roads, Reserves and Raises.

Since Republicans became the majority in the SC House 25 years ago, we have cut over $54 billion in state taxes. This week, we were able to achieve the first pillar, tax relief, by passing an income tax relief bill that cuts another $1 billion in taxes. Here’s what you need to know:

For background, the Palmetto State currently pays an effective income tax rate of 3.1%–lower than Georgia’s 3.7% effective rate, and North Carolina’s 4.1% effective rate. With this bill, we were able to lower that effective rate to 2.54%. We are doing this through a new simplified two-rate income tax system. Our current system includes 6 different complex and out-dated tax brackets, but our plan collapses those brackets into just two rates: one at 3% and one at 6.5% after one year. The maximum tax rate also would gradually be reduced to 6% over five years, so long as conservative planning and budgeting persists. 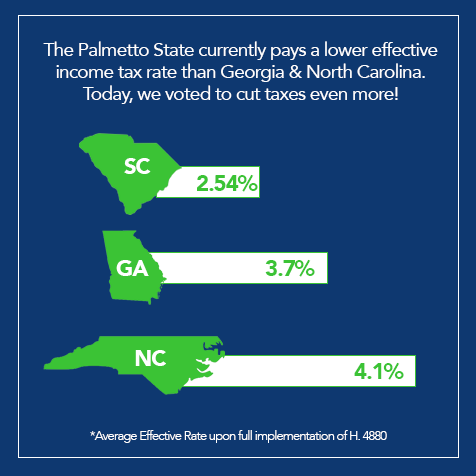 How can SC afford to make taxes so low?

Years of conservative budgeting and planning have allowed for SC to have a historic amount of surplus funds. Rather than spend this money, I want to return it to the hardworking taxpayers of South Carolina.

If you pay more than $11 in taxes, this plan cuts your taxes. Importantly, it raises taxes on nobody. Our new plan prioritizes cutting taxes for working, middle-class families in our state. South Carolinians earning less than $25,000 will see, on average, a 25% tax decrease upon full implementation. We also eliminated income taxes on military retirement for our 58,000+ veterans, allowing us to say thank you and making it easier for them to say yes to South Carolina.

The tax plan passed the House this week with a unanimous 110-0 vote, which is indicative of a good bill that both Democrats and Republicans supported. It was great to be joined by my colleagues across the aisle to strive towards our common goal: to make South Carolina a better place to work, live, and raise a family. 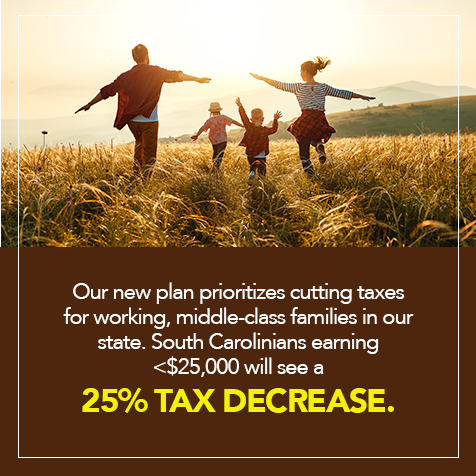 Last week, I voted to designate millions of dollars to improve, expand and repair the condition of our state’s infrastructure. The House passed the ARPA Funds Appropriations Bill, which outlines how we will spend federal dollars, including but not limited to:

To see other dollar amounts, view the bill here.

Last week, the House unanimously voted to pass H. 3346 which will increase our state’s reserve funds, which are often referred to as ‘rainy day funds’ here in Columbia. Currently, our general reserve fund equals 5% of the total general fund revenue (revenues from taxes, fees, interest earnings, etc). The increase will be gradual, slowly raising the percentage by 0.5% until our fund is 7% of general fund revenue. The bill also increases our Capital Reserve Funds (funds which can be spent if needed for things like deferred maintenance, or later put in the General Reserve Fund) from 2% to 3%, which would have South Carolina at 10% savings per year. I was proud to support this legislation, because being economically cautious is fundamental to ensuring our economy is prepared for financial adversity or economic uncertainty down the road. This reserve fund increase will take effect upon ratification of an amendment to our State Constitution.

We are proud that we will be able to incorporate new raises for a number of core workforce groups throughout South Carolina this year. The past few years have given us renewed respect for our teachers, law enforcement officers, and state employees. Because of wise allocation of state dollars, we are able to show our appreciation to these key workers through significant pay raises. Here are some of the items that passed out the Ways and Means Committee and will be incorporated into this year’s House budget:

Law enforcement: It is imperative that we recruit and retain State Law Enforcement Officers in South Carolina. To accomplish this, we are increasing the base salary by 17%. This makes South Carolina State Law Enforcement’s salary competitive with local municipalities and surrounding Southeastern States. To make us competitive, to show appreciation, and to keep our law enforcement safe, the House’s budget will include:

Teachers: South Carolina is facing an unprecedented teacher shortage, only to be made worse by pandemic conditions. More and more teachers are leaving the profession, so to help mitigate this, we are including the following in our budget:

State employees: Our state employees have always been a huge asset to our state, but have proven to be absolutely fundamental over the last two years. They continued to work hard and face the challenges that this pandemic brought. In this budget, we have recognized their hard work and dedication by including the following:

I am proud of what we have accomplished and I am excited about what is on the agenda. I look forward to working on the budget in the next few weeks to put the 4 R’s – relief, roads, reserves, and raises – into action. 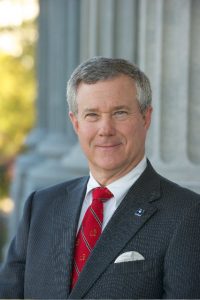