by Bill Hixon
6 Days Left for Road Fix
It’s hard to believe the first year of our two-year legislative session is nearing a final close. It is during these final 6 days of the regular legislative session where consensus is built, and bills make their way to the desk of the governor. For the second week in a row, the clock ticked while the Senate engaged in a contentious debate of the House roads bill. In a break of good news, the Governor also signed 5 new pieces of legislation, chief among them a bill to bring solvency to the public employee retirement system.
While my colleagues and I have done our part in the House to address education, workforce development, infrastructure, and the public employee retirement system among many other things, the Senate remains stuck in a rut of inaction.  Ours is a part-time legislature meeting Tuesday through Thursday for about 18 weeks out of the year. We are now in our 16th week and only six regular days of session remain under normal circumstances.
In the House, my colleagues and I spent time in committees reviewing Senate bills and vetting additional legislation. This week, we will take up Senate amendments to the budget which passed a number of weeks ago, evaluating each through a lens of fiscal responsibility. The state budget will likely go to a conference committee where additional differences will be ironed out prior to a final vote being taken.
The Roads Bill
Addressing the condition of our state’s roads and bridges is the top priority of nearly every legislator in the House and Senate. After two weeks of public debate on the matter, I was pleased to see the Senate give the House roads bill a final vote. At approximately 10:30 p.m. Wednesday night, and after nearly 75 proposed amendments, one final amendment was added to the roads bill by senators and a successful vote for passage was taken.

To be sure, the Senate version is not ideal or perfect – far from it. Many in the Senate would even agree with this conclusion. Among other things, the Senate version of the roads bill doubles driver’s license fees, includes a wealth redistribution element more commonly known as the “Earned Income Tax Credit,” provides tax credits for college students, and almost completely removes the DOT governance model contained in the House bill. In keeping with the legislative process, the bill now heads back to the House where we will begin debate on the merits of these Senate changes and work out the policy differences between the two plans. I voted for the House bill. I am not in favor of all the Senate changes. More than likely this bill will end up going to a conference committee.
Public Employee Retirement System
As I have stated before, both the House and Senate reached a legislative agreement on the first phase of the long-term approach to securing the public employee retirement system. This monumental undertaking was a problem created over a number of years, and will take just as many if not more to be fully resolved.
The first step, one that stops unfunded liabilities from increasing, was signed by Governor McMaster this week. The House and Senate will continue work through the summer and winter months to craft the next phase of legislation ensuring the retirement system remains fiscally sound and secure.
I invited the North Augusta girls’ basketball team to the State House to honor them for winning the 2017 AAAA Championship title. The team took top honors at the state competition on March 4, 2017, at the Colonial Life Arena. The team, coaches, and school officials were recognized and commended for capturing the Championship title. I am forever grateful for the pride and recognition that the young women of North Augusta High School basketball team have brought to their school and community! 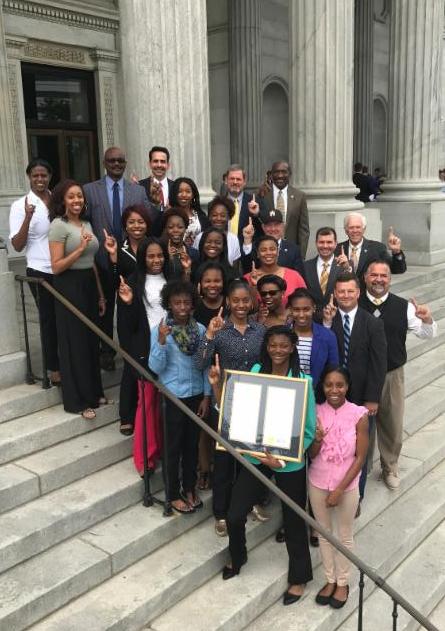 In order for me to have a strong voice in Columbia, I have to communicate with my constituents. And that is you! My website, newsletters, mailers, and Facebook are the communication tools that I use. It takes extra time, staff, and campaign funds to maintain these tools.
If you would like to contribute, please mail a check to Hixon for House, P.O. Box 7927, North Augusta, SC 29861. You can also make a contribution online on my website.
I hope that you find this update helpful and informative. If I can help you with an issue, please let me know. Thank you for reading and allowing me to serve you.

Legislative Update   –  May 1, 2017
The House of Representatives concurred in Senate amendments to H.3792, a bill addressing MINIMUM STANDARDS FOR RESTROOMS AVAILABLE AT MIDDLE AND HIGH SCHOOL STADIUMS, and enrolled the legislation for ratification. This legislation establishes minimum standards for the numbers of restroom plumbing fixtures available for men and women at middle school and high school stadiums as a means of relieving public schools from the financial burden placed upon them by current requirements. The legislation’s minimum standards apply notwithstanding otherwise applicable building codes and plumbing codes.

The House approved S.181 and enrolled the bill for ratification. The legislation provides RECYCLING COMPANIES with the same protections afforded suppliers of virgin materials under South Carolina’s Hazardous Waste Management Act. The revisions are in keeping with changes adopted at the federal level under the Superfund Recycling Equity Act.
The House amended, approved, and sent the Senate H.3549, legislation ALLOWING THE ISSUANCE OF PERMITS FOR ON-PREMISES CONSUMPTION OF ALCOHOLIC LIQUOR WITH THE CONSENT OF NEARBY SCHOOLS. The legislation revises provisions that prohibit liquor licenses and permits from being issued to businesses located within certain distances of churches, schools, or playgrounds, so as to allow a permit for on-premises consumption of alcoholic liquor to be issued to a business so long as the local school board of any school located within the proximity provides a statement that it does not object to a permit being issued. Legislation was approved in 2014 to allow nearby churches and playgrounds to provide such permission.
The House approved and sent the Senate H.3926, a bill providing updates and REVISIONS TO THE PHARMACY PRACTICE ACT to add definitions, provide specific guidelines, health and safety standards, and procedures for compounding pharmacies and pharmacists regarding the preparation of compounded medications. The legislation establishes current good pharmacy practices for the preparation and dispensing of compounded products, workplace safety, equipment maintenance, record-keeping, and consumer protection. The legislation provides public health standards for the compounding area environment, preparation, labeling, storing, dispensing, and distribution of sterile preparations. Authority is included for compounding materials in advance and storing them when a need for the supply can be anticipated.
The House approved and sent the Senate H.4119, a bill providing AUTHORITY FOR RENAL DIALYSIS FACILITIES TO DELIVER LEGEND DRUGS OR DEVICES TO PATIENTS.
The House approved and sent the Senate H.4005, a bill designating the third week in October of each year as “SOUTH CAROLINA NATIVE PLANT WEEK”.
As always, thank you for the privilege of serving you in Columbia. If I can ever be of assistance to you, or if you have ideas on issues you want me to share with the rest of the General Assembly, please do not hesitate to contact me.