This week, Conservatives in our state joined a national movement to rein in out-of-control Federal power. The House Republicans, led by House Speaker Bobby Harrell, approved a resolution calling for a U.S. Constitutional Convention to amend the Constitution with the "Repeal Amendment." The Repeal Amendment would allow two-thirds of the legislatures of the states to repeal a federal law.

House Republicans do not take this call lightly. As Speaker Pro Tempore Jay Lucas of Hartsville said: "This is one of the most important, and most significant, pieces of legislation we will consider all year." Our state and federal constitutions were created to protect the people from the government, and by doing so, ensure the preservation of liberty.  That protection of individual rights and state sovereignty is precisely why the House supports the Repeal Amendment.

The Repeal Amendment has a long way to go. Two-thirds (34) of U.S. states will have to approve similar resolutions to call for a Constitutional Convention and three-quarters (38) states will have to ratify the amendment once proposed. Only 17 states are currently considering the resolution.

Our Founding Fathers created a brilliant system of government with great checks and balances against Federal power. Our Founders could have never conceived Obamacare, the suspension of the secret ballot, Real ID, and other brazen power grabs by the Federal Government. This amendment creates a new check on Federal power and reaffirms the sovereignty of the states.

Concealed Weapons Permit Bill:
A bill (H.3292) which will simplify the list of places where concealed weapon permit holders may legally carry their weapons is pending in a House Judiciary subcommittee.  While the bill increases the number of places where a concealed weapon would be allowed, it would still prohibit them in places like jails, courthouses, election polling places, and anywhere that federal law prohibits them.  It also will allow private property owners like churches and businesses to prohibit them on private property. There seems to be several issues that have come up with this bill that I will be watching very closely.
Meeting with the Governor:
Last Wednesday evening our freshman legislative class joined Governor Haley for a work session and dinner at the Governor's Mansion. It was an opportunity to have an exchange of ideas on moving SC forward. Our freshman class was most impressed with her hospitality.
Shadow Day:
I enjoyed visiting with several students from various high schools from our area. Once a year students are selected to shadow law makers for the day. They visited both the House and Senate chambers. Below is the list:
Aiken High – Matthew Epps
Aiken High – Katie Besley
South Aiken High – Dylan Gunnels
South Aiken High – Phoebe Taylor
North Augusta High – Peyton Shiver
North Augusta High – Chase Pardue
Midland Valley High – Jenna Black
Midland Valley High – Tevin Nuckles
Ridge Spring Monetta High – Taylor Gomillion
Wagener Salley High – Shane Hutto
Silver Bluff High – Kendall Evans
Charter School Bill Update:
Looks like this bill will finally reach the floor this week. (H.3241). This bill provides more equitable funding to charter schools and allows more choices for students and parents in the public school system.  There are 3 "pots" of money that are allocated to public school districts – (1) federal; (2) state; and (3) local dollars.  As currently drafted, this legislation will allow local dollars to follow a state-sponsored charter school student.  If the school is a brick and mortar charter school, then all of the local dollars that the child would have received had he attended his residential school can follow the child to the state-sponsored charter school.  If the school is a virtual charter school, then seventy-five percent of the local dollars can follow the child to the state-sponsored charter school.  An amendment is expected to change the proposed law so that the money involved is not local dollars but state dollars. In other words, the state will fund the state-sponsored charter schools. Finally, the bill will allow students enrolled in public charter schools to play sports at the school where they would normally attend if the public charter school does not offer the same sport.  My understanding is that the SC High School League has agreed to this provision.
Charter Schools are Public Schools:
There seems to be some misinformation being sent out. Charter schools are public schools. Charter school students are subject to the same requirements as schools run by school districts. Charter schools face the same accountability hurdles as "traditional" public schools. School districts are protesting that we're taking "their" money. It's not "their" money. It's your hard-earned tax dollars for the children of our state. And the amount we want to use to fund the state-chartered public charter schools is less than one percent of the $2 billion you pay to fund public schools each year. It is less than one percent of the state's education funding. It is money that will go to educate students in public charter schools. It is money going to educate students who have elected not to go to a traditional public school. Philosophically, as a conservative, if a parent is paying taxes and has children in school, their tax dollars should follow their child – especially if that child is still attending a public school. The other option is to do nothing and let our charter schools fail. That is simply not an option.
Government Restructuring Next
Three bills aimed at restructuring government made their way out of the full House Judiciary Committee this past week and are on deck to be debated on the floor shortly. The South Carolina Restructuring Act of 2011 (H. 3066) will restructure the Budget and Control Board under a new Department of Administration and supervised by the Executive Branch, and H. 3152 and H. 3070 would call for the joint election of the Governor and Lieutenant Governor and for the appointment of the State Superintendent of Education by the Governor respectfully.
Voter ID Update
The Voter ID bill (H. 3003) is now on the floor of the Senate and after much debate, the bill has received cloture. I urge you to contact the Senators and ask that the bill be passed quickly to protect our elections' integrity. You can reach the Senators by visiting www.scstatehouse.gov

Please keep in mind that you can view Live broadcasts of the South Carolina House of Representatives daily legislative sessions by clicking Here. 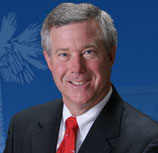