Hello my friends, I just wanted to tell you some of the things that we are working on in the State House. I have been getting many complaints about our roads, SCDOT is very helpful with our request to fix the pot holes. Please inform us if we miss any. I am still working on the lock and dam issues. I am not giving up!

We were busy at the State House with a lot of behind the-scenes work as we debated in committees on this year’s state budget, Santee Cooper, education, opioid abuse, and a host of other important issues. Budget week will start on March 10th so until than we will continue to spend more time in committee then we will on the floor. Keep reading to see what is included in the House Ways and Means 2020-2021 budget proposal.

Budget Proposal: The House Ways and Means Committee passed this year’s budget proposal 24-0. Unlike politicians in Washington, we worked together to get a bipartisan consensus, including working with Governor McMaster to mirror his priorities.

⁃       $77 million for immediate, accelerated, and expanded road repairs on shovel ready projects for farm to market roads in every county

⁃       $138 million to the Department of Corrections to fund safety upgrades

More Judges: (H. 4974) will create three additional judicial seats. This will provide much-needed additional judges to help try a growing backlog of cases. After passing the House in a 105-5 vote, the bill now goes to the Senate, where it awaits a hearing in the Senate’s Judiciary Committee.

Technical College Scholarships: (H. 3576) establishes a scholarship fund for students at the state’s Technical Colleges, was passed by the House unanimously earlier this month and is presently awaiting debate on the Senate floor. This legislation would aid low-income students who are attending training programs in fields where there are critical workforce shortages. This helps ensure students are studying in fields likely to lead to good-paying jobs and help keep companies from leaving our state due to the lack of qualified workers.

SC Tourism Grows: The SC Department of Parks, Recreation & Tourism announced that South Carolina tourism is now a record-breaking $23.8 billion industry. SC tourism supports one in every 10+ jobs and generates $1.8 billion in state and local taxes.

Did you know you can file a damage claim to SCDOT? If your car is damaged because of a pothole or other roadblock that has been reported to SCDOT but has not been fixed you are eligible to file a report.

Keep up with the SC House GOP Caucus: 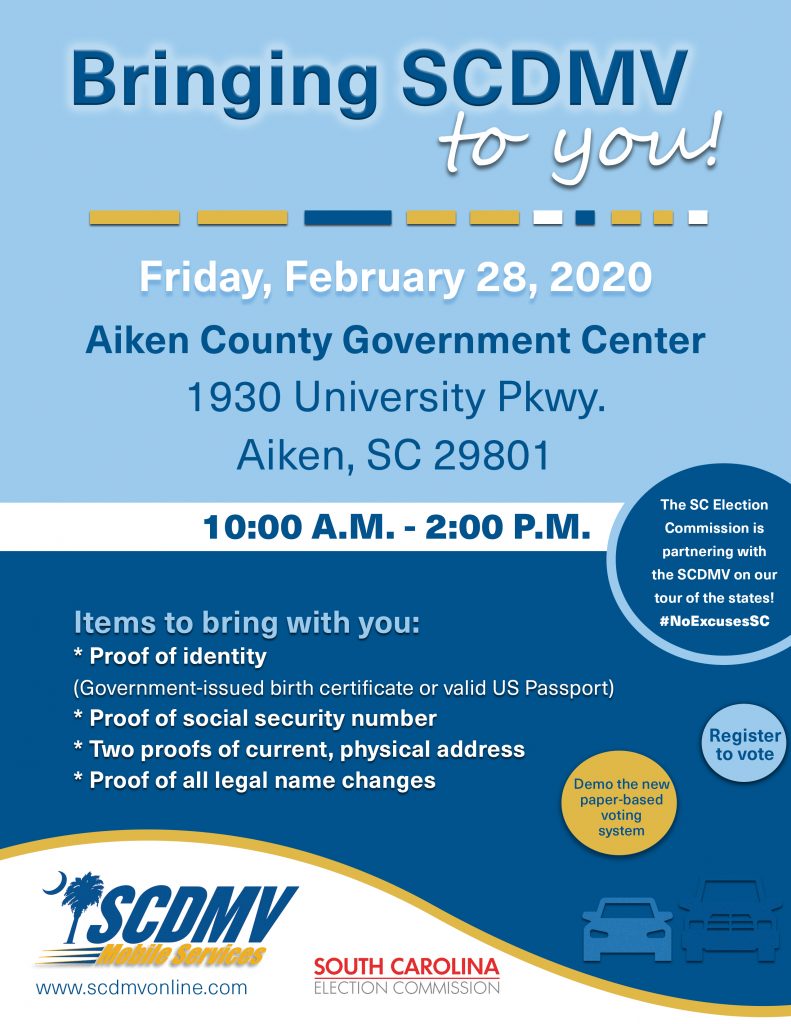 People interested in using a mobile office to purchase a REAL ID must bring all required identity documents and $25 to purchase a REAL ID driver’s license (regular, non-commercial license). However, a customer’s new REAL ID driver’s license will be mailed to his or her home address after the identity documents are copied and the payment is received. No one will walk away with a REAL ID in hand. This is an effort to make the process even more secure for the SCDMV. By not issuing driver’s licenses at the time of sale, the agency does not have to account for secure cardstock and laminate on site during the mobile deployment.

In order to purchase a REAL ID, a customer must bring original or government-issued copies of all of the following:

Please let me know if you have any questions about the information above. For your reference, about 26% residents in SC currently have a REAL ID. If current trends continue, about 40% of the state will have a REAL ID by October 1, 2020.

We are listening to teachers: I am very pleased to say that Speaker Jay Lucas has proposed (H. 4760) which will continue our education reforms efforts by reducing the number of state-mandated tests and assessments. This will allow more time in the classrooms for teachers to teach. The bill successfully passed subcommittee and full committee this week.

Teacher Bill of Rights (H.4753): I (along with every one of my House colleagues) voted for the Teacher Bill of Rights that addresses many concerns heard from teachers about limitations that have been placed on them in the classroom. This bill addresses student discipline, reducing frivolous lawsuits, cutting out burdensome paperwork, compensation for extra days, providing ongoing professional training, and adding a daily “duty-free” planning period. The bill also enacts a 100% property tax credit for teachers in the I-95 corridor.

The General Assembly received from the Department of Administration (DOA) their report outlining three finalized options for the future of South Carolina’s state utility, Santee Cooper. These options include a sell/purchase option; an option to bring in an outside manager, and an option to reform Santee Cooper. After reviewing numerous offers, the DOA completed their evaluation, chose the best three options for the state-owned utility, and reported to the General Assembly.

Now, the House and Senate must decide on the best option for ratepayers and taxpayers in South Carolina. Ways and Means Chairman, Murrell Smith, appointed ten members to an Ad-Hoc Committee to go through all of the information in the DOA report and bring their findings to the full House within 30 days. This is all in response to the billions in debt accumulated from the failed V.C. Summer nuclear plant project that has resulted in lawsuits and higher rates for electric customers who are served by Santee Cooper as well as most Electric Co-ops, many of whom purchase electricity for their customers. It’s an issue we must push to a resolution as soon as possible.

Daylight Savings: The House and Senate both passed a bill this week that will make daylight savings time permanent. By passing this legislation, South Carolina joins five other states who no longer want to change their clocks twice a year. This legislation will not go into effect until Congress passes their version of the bill and the President signs it into law.

Helping Farmers (H.4209): Hurricane season has greatly impacted South Carolina farmers in recent years, so we are taking the necessary steps to protect the state’s farmers and their crops. This week, I supported a farm aid bill that creates the framework to protect farmers in case of catastrophic events. A farmer is eligible for the farm aid grant if they have experienced a 40% loss of agricultural goods as a result of a catastrophic weather event and governor-declared state of emergency. The grant will be determined by the Department of Agriculture.

The House amended, approved, and sent to the Senate H.5062, a bill that allows the option of obtaining HARD CARD HUNTING AND FISHING LICENSES and other wildlife permits and tags from the Department of Natural Resources that are made of plastic or similar materials so that they will be more durable than paper versions.  Those who select this option are subject to a six-dollar fee of which the issuing vendor may retain one dollar.

More Nurses:   To help meet the nursing shortage and to support veterans seeking post-service employment, I voted for a bill ( H.4404 ) that enables military medics and corpsmen to get credit for their experience as they seek associate’s degrees and bachelor’s degrees in nursing. This bill passed the House and was sent to the Senate for their consideration.

Moving Slow Drivers Out of the Left Lane (H. 4835 and S. 9): The House and Senate are considering bills that would discourage slow drivers from staying in the left-hand lane. The House version of the bill would give a $200 fine and points against your driving record if a slower driver in the left hand-lane knows that he is being overtaken by a faster car and will not move over.

Identity Theft (H. 3066): This bill requires the destruction of arrest records for those who are arrested as a result of mistaken identity and require that to be done at no charge to the person who was wrongfully-arrested. This bill now goes before the Senate for their consideration.